Sometimes the coffee runs out, taking with it all of your ideas.

I’ve been working on some short stories recently, and one of the problems I run into is that I’m just pre-programmed to write novella or novel-length works. Short stories are hard. Especially plotting them. Blegh.

Then I found this. 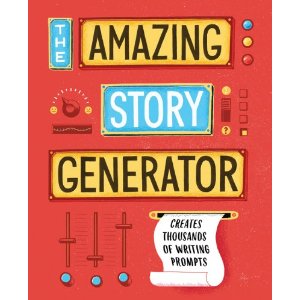 a pirate costume this year…on the other hand, we can sleep well at night knowing that there is such a thing as a zombie ninja). Once there, I wandered through the sales area, the sci-fi shelves, and then the writing zone…and found The Amazing Story Generator by Jason Sacher.

I like anything with Amazing in the title, so I flipped through it. The book has three panels: story elements, characters, and plots. You can supposedly get thousands of different story ideas.

It is, in fact, amazing. So amazing that a sales associate heard me giggling and joined me for a couple minutes of entertainment.

Ignoring the advice of friends, the First Lady slowly transforms into a centaur.

While on a second honeymoon, an identical twin burns down a house.

After winning a bet, a freelance assassin creates a family of robots.

…I might try to write that last one, actually.

Naturally I bought the book.

I think it’ll be both a great writing tool (because I stall out all too often when I try to write a short story) and also something to whip out at parties.

Things have been busy around here. I’m trying to knock out some projects so I have time to devote to NaNo, and I also somehow got asked to contribute to a magazine, so…I guess we’ll see.

I discovered L.E. Waters earlier this week while looking for books about past lives. Her Infinite Sacrifice is free for the time being, and it is gorgeously written. If you like past lives and beautiful writing, it’s a definite recommendation. I’ll be buying its sequel, Infinite Devotion, next week once I have some time to sit down and read!

When I like an author’s work, I check out their blog, and L.E. Waters brought up an interesting question in this post about J.K. Rowling. Namely, how do you handle writing in multiple genres?

As someone who likes to dabble in different genres, this post really got me thinking. My work under SPB fits into comedy-horror and sci-fi. The zombie stories are the big sellers; the sci-fi…not so much. What I mean is I track the sales, and I’m not getting a lot of crossover traffic. I do have a handful of emails from people who have read either GNW or Echoes and ventured to the other based on enjoying that one, but for the most part they’re very different sets of readers.

So…I guess what I’m asking is, is a writer betraying her readers if she tries a new genre? Reading Waters’ initial post, I’m beginning to suspect some readers will feel some level of betrayal:

My heart sunk when I saw that it was a black comedy, reminding me of a plot for new tv series. I know she is a great writer, but I don’t want to read about this sort of world. I want to read her fantasy.

She goes on to say that she’ll be changing her writing plans, and will probably release a historical novel after the Infinite series to better please her readers.

I’m of the opinion that Rowling was up against a brick wall no matter what she chose to do. If she wrote another fantasy novel, it would be forever compared to Harry Potter. If she switched, she’d be questioned for trying something new. She could always write under a pen name…but then how do you transfer the force behind the Potter brand to the new book? Clearly, her publishers are hoping some of the Potter magic will transfer to the new book and spur gigantic sales figures. Writing under a pseudonym probably wasn’t even an option for her.

And really, should she have to? She devoted years of her life to Potter and that fandom. She’s well within her rights to try something new. Her fantasy fans don’t need to read the new stuff, but I bet a lot of them will check it out, just because hey, it’s Rowling! Frankly, I can’t blame her for trying something totally new. It’s like the whole Tarja vs. Anette situation with Nightwish: they weren’t able to duplicate the Tarja voice, so they went with its polar opposite. And it worked.

Rowling discussion aside, I completely understand where Waters is coming from. It’s probably a question most working writers must address: what kind of stories do I want to write? What will sell?

The folks who contact me most about my work are zombie fans, but while I love zombies, I don’t want to write about them exclusively until the end of time (or until December 21, whichever comes first). But at the same time I want to make a living, and Vibeke vs. The End of the World has been helping me pay the bills for almost a year.

So no, I don’t want to alienate anyone who may be into me just for the living dead. But I also want to try other things.

At the moment, my plan for the Blackmore pseudonym is to use it as my main genre handle. Sci-fi, fantasy, horror, and its offshoots. The story I’m working on for NaNoWriMo looks like a sci-fi novel with a love story in it…is it a romance? Not quite. So if it’s ever published, it would be under the Blackmore name. But if I got the urge to write contemporary chicklit, then yes, I would publish it under another pseudonym.

But then I’d have to figure out how to handle the pseudonym. I’ve had some pretty good sales under Blackmore. The natural thing to do is say, “Hey, I’m writing under another name, check it out if you’re interested,” but doesn’t that kill the purpose of a secret moniker? Or is everything just an open secret on the Internet anyway?

a) Create a new pseudonym. Tell no one. Hope the work stands on its own. (The Super-Secret Pseudonym.)

b) Create a new pseudonym. Announce it on your website and have a link to your second handle’s work. Casual readers may not know it at all; only your diehard fans who visit your site will be aware. (The Open Secret Pseudonym.)

c) Use some variant of your present name to keep the two handles connected. “Patrizia Blackmore,” for example, blazoned across Fabio’s chest on the cover of the new romantic novel. (The Lazy Man’s Pseudonym.)

Actually, I kind of like Patrizia…gives me an exotic flair I lack in real life.

Anyway, it’s an interesting situation to ponder, and many thanks to L.E. Waters, both for writing an outstanding book and providing fodder for my latest blog post!