Went to a wedding last night. It was a lovely, relatively stress-free event (aside from the whole finding a dress thing); I got to wondering how women (and I guess some men) can flip out so very badly over what usually boils down to a three-minute ceremony and a three-hour boozefest.

(This isn’t counting religious ceremonies, which I understand have all kinds of steps and prayers and unity candles and bridesmaids falling asleep with their eyes open.)

I mean…you go stand in front of an officiant. You say a few words–usually repeating after the officiant–and kiss your spouse, and then you go drink and dance! Why do we make this so difficult for ourselves? In light of this, I have decided that if I ever get married, we are eloping. No ceremony, no bridesmaids, no pain in the ass preparations. We will have a fabulous party afterwards with plenty of booze and cake. Because that is all you need for a good wedding, really.

Happily, I was not overly hungover post-wedding (I cannot say the same for my father and brother, unfortunately), but the gardeners were very, very busy this morning, and let me tell you…waking up to plugged sinuses is every bit as bad as a nasty hangover. Zyrtec and coffee, my friends. Zyrtec and coffee.

In lieu of more entertaining/informative content, I give you the second entry of The Iliad for the Rest of Us…breaking down the action and epic poetry into something a little less pretentious for the Facebook crowd. It’s mostly to help myself remember who’s yelling at who in the midst of all this epic prose. So far, Iliad has been straightforward. Aeneid looks downright nightmarish.

ZEUS: You know, this war has gotten boring lately. Minion, go give Agamemnon a dream. Tell him he will win a great victory and let’s see what he does.

AGAMEMNON: I have had a marvelous dream of victory! Rather than commanding us to race into battle, I’m going to pull a King Lear and test my soldiers’ loyalty. Gather the troops!

SOLDIERS: YES! THE HELL WITH TROY!

[soldiers stampede back to the ships]

HERA: OH HELL NO. Athena, go tell Odysseus not to do that.

ATHENA: Odysseus, too many Greeks have died for y’all to just split. It would not be HONORABLE.

ODYSSEUS: By jove, you’re right. HEY GUYS, STOP BEING WIMPS. AGAMEMNON IS TESTING YOU AND YOU ARE FLUNKING WORSE THAN CORDELIA.

THERSITES: Yo, king, this is not cool. You are a total asshat, keeping us here for ten years! You’ve also managed to piss off Achilles, who, let me add, can KICK YOUR ASS any day of the week. Can you all tell I’m the insult comic of the group? Triumph the Insult Comic Dog should play me in the next adaptation.

ODYSSEUS: Dude, quit being a dick.

[He slaps Thersites around and makes him cry.]

GREEKS: Hey, look how Odysseus handled Thery over there.We should listen to him.

ODYSSEUS: I am going to use a lot of words to say very few things. In the future, this will be referred to as “subtlety.” Guys, we can’t leave yet. Our psychic told us we would win after ten years, and ten years is almost up. Victory is near!

AGAMEMNON: Y’all are right. Maybe if I had SMARTER COUNSELORS, Troy would be sacked by now. All right, kids, here’s the deal. We are gonna take this city, and anyone who tries to bolt is gonna get my sword up their asses. Capice? Now let’s make a sacrifice and fight!

HOMER: And so the long-haired Greeks headed into battle again…ah, shit, I don’t want to describe a fight scene right now…so here’s a laundry list of all the countries that sent ships and men. I copied and pasted it from an old Linear-B tablet. Enjoy!

HOMER: Okay, fine! Here, let’s introduce the enemy in this epic poem — behold THE TROJANS! Pitching tonight is HECTOR OF THE SHINING HELM, described as quite the stud muffin, ladies; AENEAS, who will apparently go on to found Rome and Britain in a roundabout way; other people you don’t care about! SARPEDON and GLAUKOS, who have their own buddy comedy going throughout! AND…let’s end it on a cliffhanger. HERE COMES THE FIGHTING!

*”Let no man be urgent to take the way homeward until after he has lain in bed with the wife of a Trojan to avenge Helen’s longing to escape…” (Ick.) 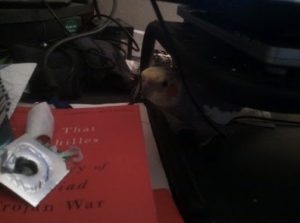 Juno has taken to exploring the mysterious world underneath my computer stand. There’s nothing really under there, but she can putter for minutes at a time (maybe that’s hours to a small bird, I don’t know).

No, that is not a condom wrapper sitting in the foreground. That would be an empty Zyrtec sleeve. Which reminds me, it’s almost time to restock.

Speaking of Zyrtec…last night I dreamed I went to the pharmacy to purchase more (the Zyrtec-D is kept with the pharmacist, because people cook meth with it or something) and the guy there told me that since I had already purchased a good sum of it this year, I was banned from buying anymore. I distinctly remember telling him “But I have allergies!” and he would not budge. This angered me so much, I went to tell my pal Achilles, who was sympathetic, but he was busy stealing Hector’s armor and thus could not be bothered to wage war against CVS on my behalf.

In my dream, the Trojan War took place in the streets of a dilapidated San Francisco, and the undead were running around. This gave me the totally bodacious idea of pulling a Pride and Prejudice and Zombies trick out of my sleeve and writing The Iliad and Zombies…

The heat wave seems to have eased. I’m trying to schedule my August so I can maximize work output and noveling while juggling various familial obligations. I may end up just crashing in SD for the month. I guess we’ll see.

So my fridge broke again. They sent in a guy to fix it; he said “No fix” and left (he also spoke no English), and they swapped it out.

Of course, the dude shows up at 8:45. I greeted him in my PJs. Juno wolf whistled at one point. Delivery dude sort of blinked. I pointed at the bird. “Sorry. It’s not that kind of movie.”

In other news, am poking through The Iliad and Achilles calls Agamemnon “The Great Shamelessness,” which I may steal as a nickname for Juno, who I occasionally refer to as Viserys (she has a golden crown and talks big). Just to keep things straight, I might write down an “Iliad for the rest of us,” which I imagine goes something like this:

HOMER: One day, Achillies got mad, and here’s why.

PRIEST: Give me my daughter.

PRIEST: Apollo, can you smite them or something?

APOLLO: Sure. [sends down plague]

ACHILLES: Dude, what is this shit?

GREEK PSYCHIC: It’s because we won’t give that priest back his daughter. So we’re getting plagues and stuff.

AGAMEMNON: Hey, I’m benevolent when I feel like it. I don’t want my people harmed. I will give him back his totally bodacious daughter…but I’m taking Achilles’ wench.

ACHILLES: But I did ALL THE FIGHTING and you just sat there and waved your scepter!

AGAMEMNON: I’m the lord of all men, bitch. Deal.

ACHILLES: I am totally not fighting for you anymore.

NESTOR: Here, let me tell you all a war story, wherein I mention I dealt with better men than either of you whippersnappers have.

HOMER: And then Breseis was hauled off to Agamemnon’s tent, to polish his silverware and make his bed and do all kinds of other stuff.

THETIS: Zeus, my son’s getting teased on the battlefield again.

I also found–thank you, Google Books–The Story of King Lear, written in 1904, which explores all the Lear/Leir foundation stories and their influence on Shakespeare. It’s interesting reading; alas, the writer had far more schooling than I am, and thus quotes entire verses in Latin and Old English without providing translations, which…doesn’t help me much, being that I only understand basic Spanish, but it’s interesting to see how often this story has been passed down.

Book one keeps getting bigger. I remain mortified. Am devoting these next few days to polishing up the first quarter–the original short story–to post on mah websitez, and then I’m actually going to hunker down and work on Sailor’s Luck for awhile. 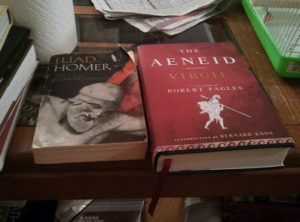 I am apparently going to read these very large books

Well, The Aeneid and The Iliad were waiting for me when I got home.

They’re a lot…thicker…than I thought they’d be.

I’m doing this for you, my Iron Age Britons of Trojan descent! It’s all for you!

I was stitching together some back cover copy for the serial novel, which still has no name. Still working on the “intro” paragraph–the one that introduces the world and tells us what’s up.

However, I did come up with a more succinct tagline that encompasses the story and appeals to my snarky side:

Still no word on the Big Machine, aside from the fact that they are indeed sitting on it and I want it back, dammit.

I think today calls for Starbucks.