I recently read a New York Times article about purchasing reviews. It’s an interesting piece, and I recommend it for writers in general. The article largely discusses purchasing reviews in connection with indie writers, but a small publishing house I worked with a few years ago did the same thing. While I don’t like the idea of buying reviews, whether they’re good or bad, the guy profiled in the article apparently managed to turn it into a lucrative business; in this economy I have to tip my hat to him for that.

What really caught my attention was Bowker’s estimate that 300,000 titles were self-published “last year” (I’m guessing that means 2011) in print or digital form. They also say that there could be 600,000 self-published books in 2015.

Folks, that is a gigantic number. It’s enough to make me pause and wonder if there will be room for me.

The article and my recent efforts to step up my marketing have left me to reconsidering what remains of my 2012 writing goals. After a rewarding but grueling year, writing-wise — I had independent projects up the wazoo, plus DBG being a problem child — I was all ready to kick off my shoes and just take it easy for the rest of the year. I figured I’d work on some short stories, but definitely put off the big stuff for 2013.

Now…now I think there’s not a moment to lose. A writer’s greatest strength is her backlist. I’ve got to get cracking on that. Right now, there’s three books with my moniker on them floating around in cyberspace. The big sellers, not surprisingly, are the zombies, because zombies are hot right now and I do think there’s a niche for a snarky female lead.

So I’m retooling my writing schedule through the end of 2012 in an effort to build up a little more momentum. I’m looking at a sci-fi novella for starters, along with several zombie short stories to feature on this site…

Meanwhile, Echoes is in its second day of free promotion and is #27 on the Kindle Science Fiction list. I have no idea why they’re lumping it in with the paid list, but…they are: 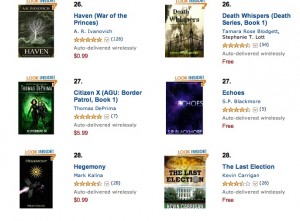 Paid or not, it feels pretty dang good to see it on any list. I don’t think that feeling ever goes away. 🙂