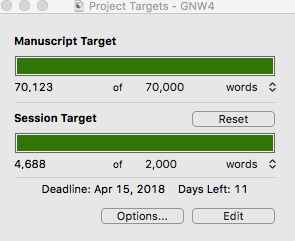 I meant to post this glorious little screengrab on the 4th, when I actually typed THE END (or at least slammed the laptop lid and collapsed into a blubbering heap), but…I didn’t.

Anyway, there it is. The rough draft of the creatively titled Grave New World 4, which is currently a hot mess of plot holes, questionable character decisions, and some of the weirdest zombie stuff I’ve ever written.

Needless to say it will undergo some changes in the revision…but there are a few things I can tell you about it.

1. It takes place a year or two after the end of Dead Men Don’t Skip.

2. Things have not improved all that much for Vibeke and her friends, but they haven’t gotten worse…yet.

I can’t really explain how I chewed through this story so fast. I started it on February 18, finished it on April 4…that’s like, what, 45 days? Somewhere around there? I can write fast when I put my mind to it — thank you, years of deadline-driven assignments — but this just fell out at insane speed. I’ve been writing Vibeke in some form or another since 2006. That’s twelve years with this character’s voice, with this gal and her friends, and I’ve still never ripped through a yarn at such a pace.

I’d say “It wrote itself!” but I tend to reserve that for stuff that pops out in close to its finished form. This…is not that. All the beats are there, the major plot points, but it is far from finished.

I’ve put it away for the time being to give myself some space before picking up the Red Pen of Revisions and slicing the thing open. In the meantime, I’m updating the blog (still transferring old entries over) and finally updating the GNW series with some much-needed front/back matter and a couple new covers for the short stories. Nothing crazy. Just minor touch-ups.

Catch y’all on the flip side!