I love technology. Love it. Computers, iPods, Internet, smartphones…I want to gather them close and hug them all. I prefer not to imagine actually writing stories without them.

With that said, I still really like taking notes in longhand.

I can’t explain this odd fetish. I have Evernote on my cell and my computers, which, in theory, is all I need…I can take a note about my NaNo project and have instant access when I get to one machine or another. The weak link there is the cell phone; much as I like it, I’m not the most adept at typing on tiny screens, and I always want to take lengthy notes (otherwise I can’t figure out what the hell I meant; shorthand is lost on me)…so it turns into a project.

Hence I still have actual notebooks.

I wanted to get something special for the NaNo project; it’s a story that has been percolating in my little brain for quite some time, and I’ve written down ideas during the year, just trying to get a grasp on what it’s about. I have a regular notebook that I jot things down in on the fly, but I wanted something a little more special for this project, so I headed over to B&N and inspected their notebook selection.

I settled on this little guy. It’s small enough to fit into a purse, and has 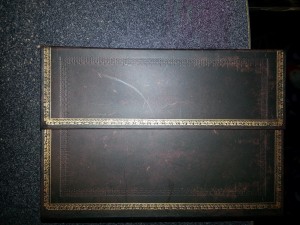 No characters yet. I have a general overall arc, and I know what happens, but it’s mostly scenes visualized in my head. Nothing is connected at the moment. I figure I have until November 1 to figure all that stuff out before throwing caution to the wind and running wild.

I still fully expect to type out my NaNo novel, unless I’m stranded somewhere with no computer and have to revert to The Old Ways, but I do like my little notebook.

What are you going to use for NaNo?